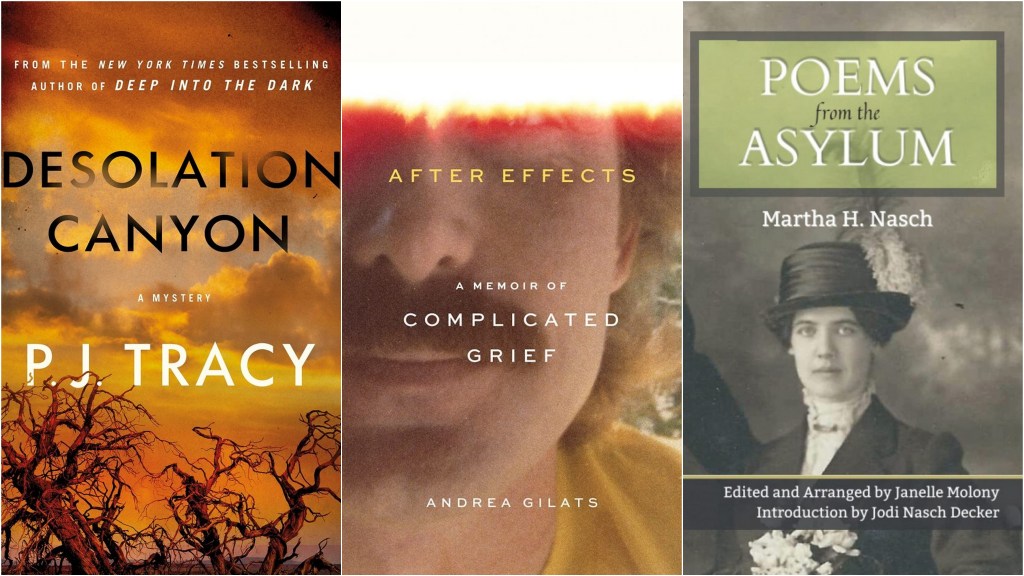 A trio of great reads – a mystery, a memoir and a piece of women’s history – Twin Cities

As daylight stays with us longer this month, we can rush through the boring tasks of our lives – laundry, etc. – so that we have more time to read. And we have three good ones for you this week. A new thriller, a beautiful memoir and a piece of women’s history. Throw those clothes in the washing machine, forget about them and open the first page.

A mysterious desert retreat that draws celebrities into the fervor of holy founder Father Paul is at the heart of PJ Tracy’s second thriller starring LAPD Detective Margaret Nolan and the largest cast of characters in any of the novels. Tracy.

In this gripping story, Nolan still mourns his brother, who died in military service. She recovers from having to shoot someone in the line of duty, and her relationship with her father, who is a former military man, grows distant. Above all, she is worried that her mother is going on a retreat to Père Paul’s Children of the Desert.

When Nolan and his sexy colleague Remy have a drink at the chic Bel-Air hotel, they find a body in the famous Swan Lake. Why would someone kill a lawyer and dump the body in such a public place? Even stranger, the coroner says the man was killed with a method used by Russian criminals.

Meanwhile, Nolan’s friend Sam Easton, whose face has melted to one side from a roadside bomb in Afghanistan, helps his friend Lenny figure out how to protect a terrified woman and her baby daughter, whom Lenny picked up on the road and hid on his boat.

Back at Children of Desert, we learn that Father Paul may not be what he seems. Half the people in this book aren’t who they say they are, including Ivan, a businessman Nolan investigates who he immediately hates when she looks into his cold eyes. And there’s Mike, a young man with mental disabilities who works at the nearest grocery store to the Children of the Desert compound and knows a lot about what goes on there because he spends time in the nocturnal desert at the search for aliens.

In the later chapters, Sam needs all of his military training to infiltrate Children of the Desert, which brings Nolan and Remy into his plans. Can they save the woman and her child, who are being held in the compound, along with Nolan’s mother? And who is the mysterious Irina everyone is looking for?

Tracy’s storylines become more complex and her characters more layered. Nolan doesn’t like many people, but she suffers for her family. Easton finally learns to live again after his injury. Remy seems to want a relationship with Nolan which may or may not happen.

PJ Tracy is the pen name of Traci Lambrecht, who wrote the St. Paul-based series Monkeewrench starring computer aces, with her late mother, PJ Traci lived in Los Angeles for 10 years, and her sense of place gives a special feel to this new novel, especially the heat and desolation of the desert.

“After Effects: A Complicated Mourning Memoir” by Andrea Gilats (University of Minnesota Press, $19.95)

“All my life, I had relied on three saving graces: music, painting and reading. Now, without even thinking about it, I had given up two at a time when I needed saving the most. And the third was in danger. I couldn’t concentrate enough to read a chapter, let alone an entire book… I couldn’t stand life. I wanted to fall into a deep sleep…”

It’s Andrea Gilats who writes about the years since her husband, Thomas Dayton, died at 52 after a five-month battle with cancer.

In these illuminating, thoughtful, and beautifully written memoirs, Gilats takes us on her journey as she experienced 10 years of prolonged or “complicated” grief. Although everyone who loses a loved one is grieving, complicated grief lasts a long time.

Although this type of grief affects up to one in seven people affected by the loss of a loved one, it is little known outside professional circles.

For Gilats, it was 10 years of what she describes as “constant and unbearable grief”. She was so in her “cocoon of grief” that it never occurred to her to ask for help.

What makes this book more than “it happened to me” is the author’s now lucid awareness of what she was going through. She tells us not only what happened, but how her husband’s death affected all areas of her life for years.

Gilats was founder and director of the University of Minnesota’s Split Rock Arts Program, a nationally acclaimed residential workshop series in visual arts and creative writing in Duluth. When the program ended, Gilats turned to other pursuits, including yoga, which she taught for years. When she underwent major surgery, the nurses were amazed at how quickly she could walk and how strong she was. All thanks to yoga.

Slowly, Gilats woke up from her years of grief when she returned to music, painting and reading.

“In life and in death, Tom had always been an unforgettable presence in my life, and now I began to imagine myself stepping into the world and not leaving it behind,” she wrote. “It was this fragile and partial reconciliation that helped me pave the way to healing, however long and winding it may be.”

“After Effects” is partly personal help for those who suffer from prolonged grief who don’t know what’s wrong with them when people tell them to “move on.” It is also the story of a strong and educated woman who is willing to share her experiences to help others. And it is a meditation on eternal love.

When you finish the last paragraph, you’re going to think, “I’d like to meet this woman.”

Gilatis will launch his book virtually at 7 p.m. on Thursday, February 10, hosted by Cathy Madison, author of “The War Came Home with Him,” presented by SubText Bookstore. Go to: subtextbooks.com.

Why did Martha Hedwig Gruening Nasch spend seven years at St. Peter Hospital for the Insane?

That’s the question her granddaughter, Jodi Decker, and Jodi’s daughter, Janelle Molony, explore in this family’s story told through rhyming poetry written by Martha during her years of confinement in St. the 1920s and 1930s, from when his son Ralph was 6 years old.

Martha’s poems about Ralph are affectionate, and those about her husband, Louis Nasch Jr. (who may have been an adulterer), reveal her grief (“Why was your God so cruel to us to leave you go away and lead you astray? / Instead of binding love for us, he took away this gift.”) She talks about her house, Christmas and other happy events as well as those she has lost.

In chilling poems (“Here I Rot”), Martha reveals the suffering she and others endured in the institution, including cold water baths that were almost torture, force-feeding and lobotomies . She reveals that patients were sometimes held against their will, even though there was nothing wrong with them. In her poem “Suffering”, she writes:

“I stand at the bar of justice,
A pale, savage creature.
I am formed as a woman,
But helpless as a child.

After Martha’s release, she became a national sensation in the press when she claimed she hadn’t eaten, drunk or slept in seven years. Was she raving or lying?

Ultimately, the writers present a good case for Martha having struggled with the birth of her sons that left her weak and tired, and that she was damaged in an operation. These physical difficulties led to her giving birth in Saint-Pierre. She married Bill Lehman after her husband’s death and died herself in 1970.

Martha’s story, and the poetry that is painful to read, is an example of how women were treated (“a case of nerves”) in those years.

There are a lot of family photos in this book, which could have been lightened by eliminating some family stories long before Martha came on the scene. But people who lived on the Upper West Side will probably remember it because the family home was at 642 Hall Ave. Ralph was baptized at the West Side Old Emmanuel Lutheran Church and his parents courted on the steps of the old Jefferson School.

Throughout the book, the editor uses footnotes to explain what Martha meant in certain poems and the significance of the poems in relation to Martha’s life.