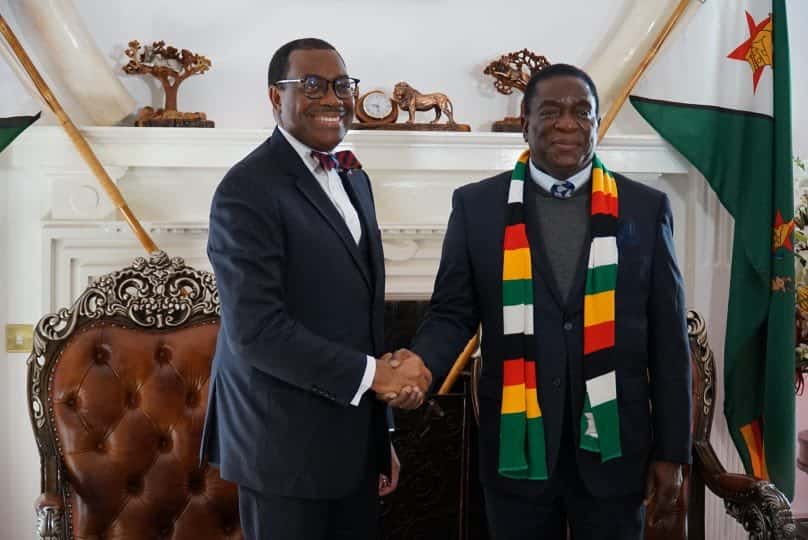 Adesina in February accepted a request from the Zimbabwean government to champion the settlement of the country’s arrears and debt among international financial institutions and bilateral creditors.

Speaking after meeting Mnangagwa, he said his gesture was a result of the suffering of the people of Zimbabwe due to targeted sanctions.

“I told President Mnangagwa it was the people of Zimbabwe. They’ve suffered enough, you know two decades. When I look at the situation today, you have 49% of people in extreme poverty and that really needs to change with new hope,” he said.

Zimbabwe is the only regional member country of the African Development Bank currently under sanctions from the Bank and other multilateral financial institutions over debt arrears amounting to over $2.6 billion. of dollars.

The African Development Bank managed the $145.8 million Zimbabwe Multi-Donor Trust Fund (“the ZimFund”) from 2010 to June.

The ZimFund has been a key source of financial support for the country’s energy, water and sanitation infrastructure. ZimFund’s seven financiers are the UK, Australia, Germany, Sweden, Denmark, Norway and Switzerland.

Adesina said he was moved by Mnangagwa’s commitment to the arrears clearance process and the re-engagement of the international community.

“As President of the AfDB, I will contribute to this. I told him (in Mnangagwa) about five regions where I have a similar role. It is my duty and responsibility to do so because we have 54 member countries from Africa and Zimbabwe is one of them. So when one of them hurts, everything else hurts,” he said.

He stressed that he had accepted the role because Zimbabwe was a reliable shareholder in the bank, as evidenced by the payment of US$9.6 million made as part of the general capital increase despite the economic difficulties. in the country.

“Zimbabwe has also continued to make token payments of around $700,000 a year to settle some of the outstanding debts.

“The third is the fact that I really believe it’s time to reinvigorate and energize the economy here because it’s essential for SADC. We are now talking about the African Continental Free Trade Area and of course Zimbabwe has to play a very big role,” he said.