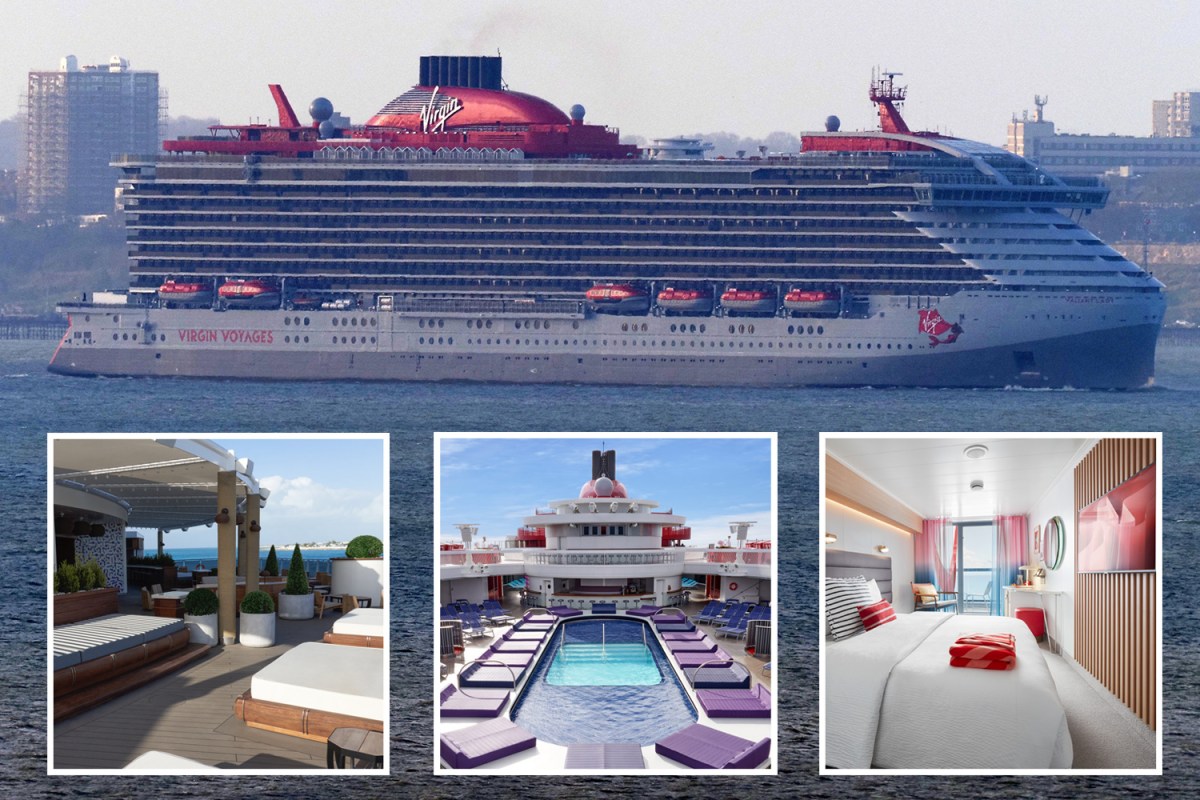 A BRIT passenger on a £5,000 Virgin Voyages cruise is said to have thrown himself overboard in the Atlantic.

The Valiant Lady was returning to Portsmouth after her maiden voyage around Spanish and Portuguese ports when the man entered the water on Wednesday evening.

An extensive search and rescue operation was launched for the missing passenger, seeing the ship turn around in hopes of finding him.

The French and Spanish coast guards were alerted to the frantic hunt, while a spotter plane and a helicopter were deployed to try to locate him.

The captain of the luxury cruise liner even desperately asked fellow guests to scan the sea for any signs of the missing man in the Bay of Biscay.

Additionally, two merchant ships that were in the area were diverted to help with the search from the sea, the Daily Mail reported.

But it was called off last night with the passenger, thought to be British, presumed drowned.

As the crew investigated the incident on board, it was claimed the traveler had “deliberately” dived from the ship.

It is not known whether he was seen by other passengers or filmed on CCTV.

The Valiant Lady has resumed its original course after the search halted and is due to dock in Portsmouth this evening – around 12 hours late.

The tragedy has rocked passengers on the brand new Virgin Voyages ship, who complained the holiday had been plagued with problems.

They said it was as if the Valiant Lady – hosting performances by 80s pop artists including Tony Hadley, Toyah and T’Pau – was “cursed”.

Passengers had paid up to £5,000 to sail around La Coruña in Spain, Madeira, Tenerife and Gran Canaria with two days in Lisbon.

But the original itinerary was shortened, seeing the trip to Portugal’s capital reduced to one day and Madeira missing out completely.

A passenger then fell seriously ill and had to be evacuated from the ship by helicopter.

The series of unfortunate events then culminated on Wednesday night when the Briton fell overboard.

One passenger told the Mail: “The cruise felt cursed from the start – it was beset by one problem after another.

“First it was little things like them running out of food and drink and the wifi wasn’t working, then the performances got revamped and the route changed.

“There were Covid infections – they had to create an area of ​​the ship for those who tested positive to self-isolate there.

“And then someone got so sick he had to be airlifted to hospital. And now this terrible incident. It was awful.”

Another guest said: “Everyone among the passengers is devastated by what happened – it’s just awful to think another passenger is likely to have died.”

Vacationers – dubbed “sailors” by Virgin – were set to enjoy a star-studded line-up of 80s icons on the adults-only cruise.

The cruise felt cursed from the start – it was beset by one problem after another.

Passengers were told last night that due to numerous problems with their journey, they will be offered a free European cruise with Virgin Voyages this summer.

The Valiant Lady – aimed at the “young at heart” and adults – offers a range of glitzy restaurants, intimate bars and a nightclub.

The posh ship earlier announced a partnership with Jennifer Lopez, which will see the singer and actress invest in the cruise line and develop entertainment and health and fitness collaborations.

A Virgin Voyages spokesperson said last night: ‘In the early hours of the morning we were made aware of a man overboard incident involving a sailor [passenger]which culminated in a search and rescue mission.

“We are deeply saddened by this news and our hearts go out to the family and loved ones of this sailor.

“Our investigation indicates that this was an intentional act and that no foul play is suspected.

“We had an earlier incident where one of our sailors on board experienced a medical emergency and required medical attention ashore.

“Our team acted quickly and with the help of the local authorities we were able to airlift them to hospital. We are very happy to report that this person is doing well and is receiving medical attention.

“As for the other areas of focus, we set ourselves a high standard and in this case we missed some things and we are very sorry that it was not ideal.

“While not everything is in our control, such as supply chain challenges to meet all onboard offers, or the weather, we remain focused on the Sailor experience and know we must continue to improve. .”

A Coastguard and Maritime spokesman said HM Coastguard had been coordinating a search in the Bay of Biscay since 7.30am yesterday.

They continued: “The French sent a fixed-wing aircraft to provide air support for a helicopter sent by Spain to carry out a search.

“Two merchant ships and the cruise ship were also assisting. The Foreign, Commonwealth and Development Office have been informed.”

They confirmed last night that the search had been called off.