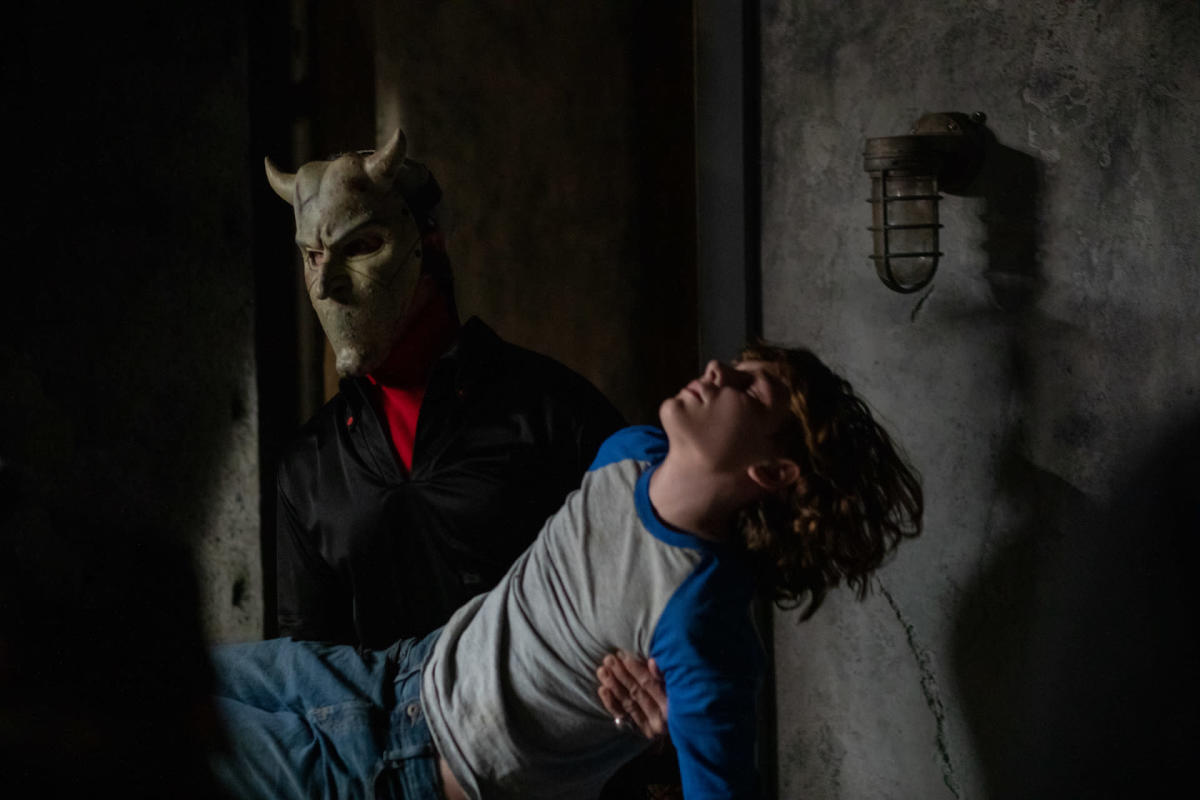 While the rest of us still have to wait another two months for The black phone, a number of lucky viewers were able to connect their calls earlier with a preview screening at CinemaCon in Las Vegas this week. Directed and co-written by Scott Derrickson (Claim, strange doctor), the film adapts the short story of the same name written by Joe Hill. In fact, it seems to be the best adaptation of Hill’s literary works to date – at least according to a tweet from The Kingcast (a Stephen King podcast led by Fangoria).

Set in the 1970s, the story picks up [the phone] in an all-American neighborhood, which has been rocked by a series of tragic child kidnappings perpetrated by a sadistic killer known simply as The Grabber (moon knightis Ethan Hawke). His latest target, 13-year-old Finney Shaw (Mason Thames), is doomed to join the growing pile of bodies until he begins to receive supernatural help from the killer’s previous victims. They make contact with the boy via a disconnected black phone in the basement where The Grabber keeps his prey.

Scott Menzel of We live entertainment called Hawke’s performance of Grabber “terrifying”, while adding that Thames and Madeleine McGraw (who plays Finney’s sister Gwen) “are newcomers worth watching”.

Weekly entertainmentit is Lauren Huff echoed the sentiment, tweeting that the film is “bolstered by great performances all around, but most importantly [by] young actors.” She also praised Derrickson’s fine balance of horror and comedy: “A room full of grown adults jumped, yelped and clapped (and laughed – that’s a good laugh!).”

Erik DavisChief Editor at fandangocalled the film “a tension-filled ’70s abduction thriller with a super creepy performance from Ethan Hawke” before adding, “Prepare to squirm in your seat and jump a few times. Also a great story about finding your confidence as a kid. But as a parent I was an absolute mess!”

Scott Mendelson of Forbes Entertainment spoke of a “beautifully staged and exquisitely acted horror-thriller” that doesn’t feel the need to “over-explain or outplay”.

“Absolutely loved it The black phone!” exclaimed John Roche of The Outlaw Nation Podcast. “It scared me, moved me, and delivered the hype with some fun surprises. Ethan Hawke is awfully GOOD, with Mason Thames and Madeleine McGraw stealing the movie. Scott Derrickson made a great movie, folks! “

Variety critical Courtney Howard – who got to see the film last fall at Beyond Fest – called it a “great suspenseful horror film” anchored by Thames and McGraw, who “steal the show. They’re terrific and deliver the goods” . Howard was the only one of the group to hail the “solid soundtrack,” which is sure to be full of period-specific hits.

The black phone on the big screen on Friday, June 24.