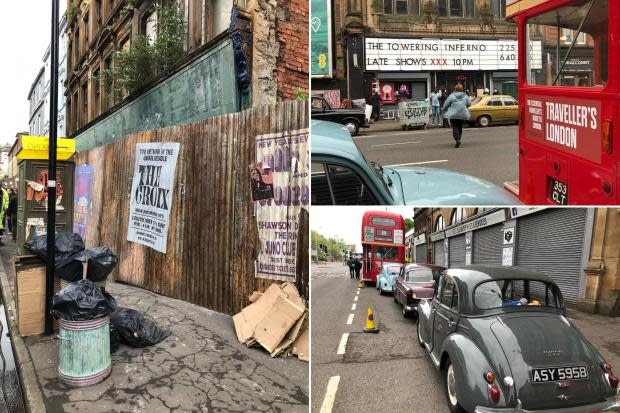 THE streets of Glasgow could make an appearance in a new film, as they have once again been spotted outside a famous Glasgow pub.

Last week we reported on a mysterious production seen outside the Laurieston on Bridge Street.

It was unclear what was being filmed, and now crews have taken over the area again.

On Friday night, cameras and floodlights were seen on Bridge Street outside the legendary bar.

Several vintage cars as well as a London double-decker bus and a black cab were parked on both sides of the road, which was closed to traffic to allow filming to take place.

Several vintage cars, a London double-decker bus and a black can were parked on Bridge Street.

Some of the businesses across from the Laurieston have been turned into cinemas, and the whole street has been decorated with old-fashioned street furniture, from street trash cans to posters and phone booths.

The shops of Bridge Street have been transformed into a cinema.

The street was decorated with old-fashioned posters, garbage cans and phone booths.

Vintage adverts appeared to be painted on the wall overlooking the pub.

Vintage advertisements appeared on the wall overlooking The Laurieston.

A number of production vehicles were parked around the corner on Norfolk Street.

It also emerged that filming was taking place both outside and inside The Lunch Box cafe, which was transformed into “Sunrise Cafe” for the film set.

The Lunch Box café in Norfolk Street was transformed into a “Sunrise Cafe” for filming.

Glasgow has seen a number of productions arrive in the city in recent months.

In April, crews were seen filming several scenes for the thriller Borderland, which is set in 1970s London and follows an IRA unit, complete with dozens of vintage cars, red telephone boxes and buses double-decker.

Filming for Batgirl also took over downtown earlier this year, with a number of Hollywood stars pictured on set, including Leslie Grace, Michael Keaton and JK Simmons.

Earlier this year The Glasgow Times reported that The Laurieston also made their first appearance on a vinyl record cover for Album Club’s debut LP.

It was created by members of the record club during the first confinement.

Musician Michael John McCarthy – known as MJ – said he put The Laurieston on the cover because he holds a special place in his heart.

He said: “Reminds me of my favorite pubs in Ireland.

“The reception is incredible.

“They do the best pint of Guinness in Glasgow.

“It’s a great community of people and it’s probably the friendliest bar in town.”