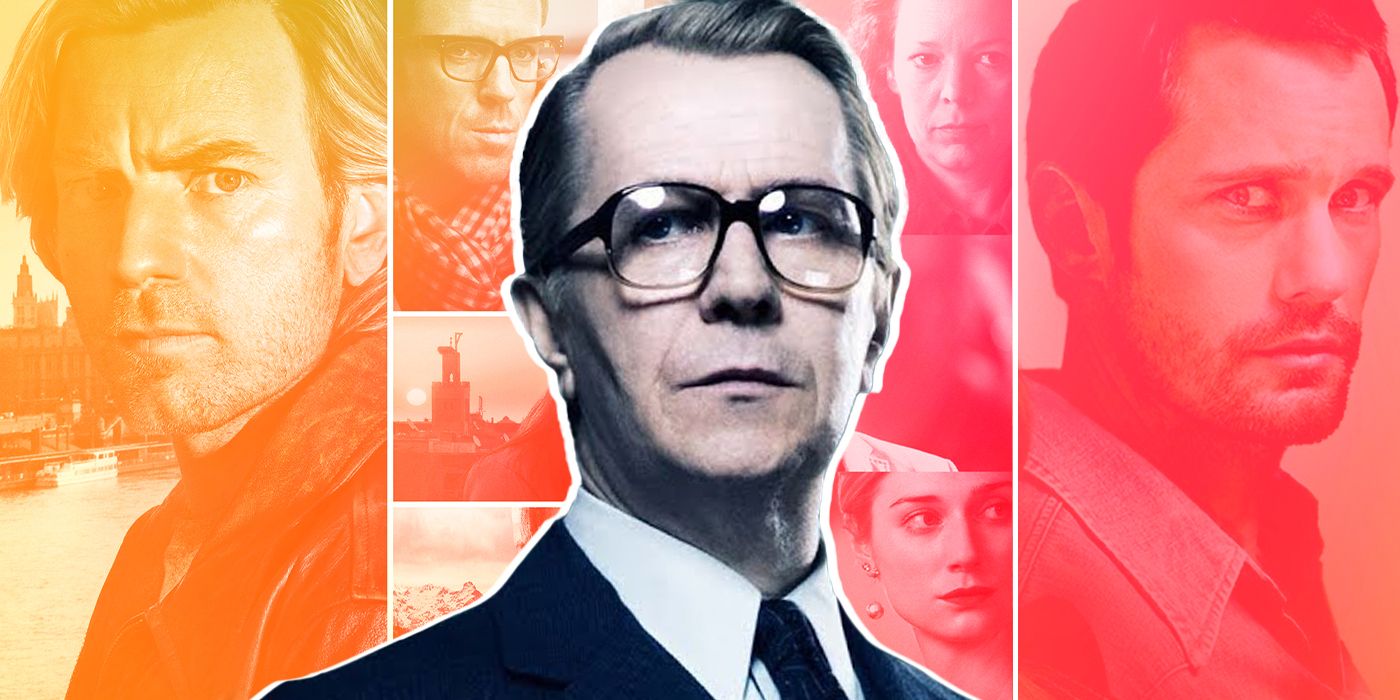 Whenever we think of spy fiction, it’s mostly James Bond that comes to mind. Agent 007, the smartly dressed, suave, martini-loving Agent 007 glorifies espionage. But if you want a completely different take on espionage and spies, then there’s a creator out there that will serve your plot just the way you expect it to.

Born David John Moore Cornwellthe British/Irish author has written a host of bestselling novels, short stories and more under the pseudonym of Jean Le Carre. Serving in MI5 and MI6 during the height of the Cold War was the inspiration for most of his work, giving the world legendary stories for over six decades. For his fans, the appeal of Carré’s work lies not in the character or the impressive lifestyle of his agents, but rather in the authenticity of these men and women. Varying between real and fictional people, Square’s spies can range from polished lone rangers to team players, and idealists to morally questionable people you’d like to love and despise at the same time. But that’s what makes Carré’s stories realistic, authentic and relatable.

Simply put, the stories of John Le Carré cannot be called spy thrillers; they are rich literary works, which have transformed dangerous socio-political events into an artistic experience.

While his contribution to the world of literature took a major hit after his death in 2020, John Le Carré’s legacy remains in the form of brilliant cinema inspired by his works. With recent releases of spy stories headlining screens big and small, it’s only fitting to pay tribute to this literary legend and master of spy fiction. Byzantine and convoluted plots, high-stakes environments and deceptive agents, emblematic of Carré, make the best spy thrillers that the world of cinema can experience.

Here are our favorite picks of all the John Le Carré novels (in order of publication) that have been made into blockbuster movies and series.

Related: 10 Movies Like ‘Operation Mincemeat’ To Watch Next For More Historical Spy Drama

His third novel, this international bestseller remains one of John Le Carré’s best-known works and is known for depicting methods of espionage inconsistent with Western values. Set in the 1960s, the story follows a British agent, Alec Leamas, who is sent to East Germany to pose as a defector and spread misinformation about an East German intelligence officer. But when Leamas realizes he’s just a government pawn in the big political game, he begins to question his role and mission.

In 1965, the director Martin Ritte adapted the novel for a film starring Richard Burton in the role of Leamas. The film won the 1966 BAFTA Awards and was nominated at the 38th Academy Awards. The spy who came in from the cold is the third sequel to Carré’s first two novels, namely, call for the dead and A Quality Murderand his very first story to be made into a feature film.

This is the first book in the trilogy featuring George Smiley. Take note that Smiley is not Bond. Instead, he’s a retired, casually dressed, bespectacled MI6 spymaster, also known as The Circus (for its Cambridge Circus location). But Smiley is bright and polished, and his character is said to have been inspired by a British Secret Intelligence Service officer. Kim Philbywho coincidentally turned out to be a Russian spy and defected to the USSR in 1963.

The story follows George Smiley, who is forced into retirement at the height of the Cold War. But he is soon brought back to dig up a mole within the intelligence service, which passed information from the Circus to Moscow. In his search for the traitor, Smiley encounters double agents, foreign counterintelligence, and his longtime nemesis Karla, a KGB mastermind. This novel, followed by The honorable schoolboy and Smiley Peopledo it Karla Trilogy.

Tinker Tailor Spy Soldier remains a masterpiece of Carré’s creation and was adapted for a television series in 1979 starring Alec Guinness like smiley. Decades later, in 2011, a feature film of the same title starring Gary Oldman as the spymaster was released and it won two BAFTA awards and three 2012 Oscar nominations.

Set in 1979, this novel follows a young British actress Charlie, recruited by the Israeli secret service to work as a secret agent. A scheming and strategic Israeli spy, Martin Kurtz uses Charlie’s radical, leftist personality to infiltrate a group of Palestinians and kill a terrorist using a masterful plan. This novel sees a manipulative and deceptive female protagonist, a rare element in Carré’s stories.

The little thresher girl was first adapted in 1984 into a Hollywood feature film directed by George Roy and featuring Diane Keaton like Charlie. For the film, Charlie’s background was changed from British to American, keeping the rest of the plot the same. In 2018, the novel was adapted for the second time as a mini-series for the BBC, starring Florence Poug like Charlie, Michael Shannon like Martin Kurtz, and Alexander Skarsgard as Mossad agent Gadi Becker. The BBC One series is the most recent adaptation of a novel by John Le Carré.

This is John Le Carré’s first novel set in the post-Cold War era. The story follows Jonathan Pine, a former British soldier, who now works as a night manager at a hotel. He is recruited by a former British intelligence officer to lead an undercover operation to catch an international arms dealer by infiltrating his vast empire. What follows is a chase through Zurich, Cairo, the Bahamas and Switzerland.

In 2016, the classic ’90s thriller was adapted into a six-part miniseries of the same name. Realized by Susanne Bier, The night manager features a star-studded cast, including Tom Hiddleston, Olivia Colman, Elisabeth Debicki, Hugues Laurie, Tom Hollander, David Harwoodand more, presented in a glamorous version of the original novel. The night manager is one of the recent adaptations of the works of John Le Carré and has won 11 awards, including the Primetime Emmy and the Golden Globe Awards.

The Panama Tailor follows a British expat with a dodgy past and an amoral MI6 agent in Panama City, both exploiting each other for their personal agendas. Harry Pendel lives in Panama City with his wife and family and runs a tailoring business, at least on paper. Andy Osnard, on the other hand, is a young MI6 agent who is sent to Panama to gather intelligence to protect British commercial interests in the region. But Andy, with a shaky moral compass, goes with his own agenda. When he discovers Harry and learns his unsavory story, Andy recruits him for the plan.

In 2001, John Borman made a film with Pierce Brosnan and Geoffrey Rush in lead roles with Carré co-writing the screenplay. The film was well received by fans and critics.

Carré’s first novel of this millennium, The Constant Gardener is based on a real incident that took place in Nigeria in 1996. The story follows a British diplomat in Kenya called Justin Quayle whose activist wife Tessa is suddenly murdered. Quayle sets out to uncover the truth of the murder and lands on an international conspiracy involving corrupt governments and big pharmaceutical companies. The more he investigates, the darker it becomes and beyond his imagination, to the point of implicating his own government.

In 2005, an eponymous Anglo-German film was made based on this novel. Realized by Fernando Meirellesthe film presents Ralph Fiennes and Rachel Weisz. A journey of emotional revelation and justice for a loved one, The Constant Gardener made headlines upon its release and won numerous awards, including an Oscar for Weisz for Best Supporting Actress.

The story of Our kind of traitor is a “gin flavored tub” (as TV Tropes calls the genre) spy fiction by John Le Carré, where civilians reluctantly get sucked into the spy game.

The plot follows an English couple, Perry and Gail, on vacation in Antigua, where they indulge in a game of tennis with a Russian business tycoon, Dmitri “Dima” Vladimirovich Krasnov, and his lovely family. Dima turns out to be a Russian mobster who uses Perry to pass information to British intelligence and defect to the UK. Much to his surprise, Perry is drawn into Dima’s plan, reluctant at first, but eventually because he finds a connection to Dima. And soon, Perry and Gail are drawn into a deadly game of global conspiracy, money laundering and espionage.

It is the last novel by John Le Carré to be adapted into a feature film. Realized by Suzanne Whitethe stars of the big screen adaptation of 2018 Ewan McGregor, Noemie Harrisand Stellan Skarsgard in leading roles, with minor changes in story locations.