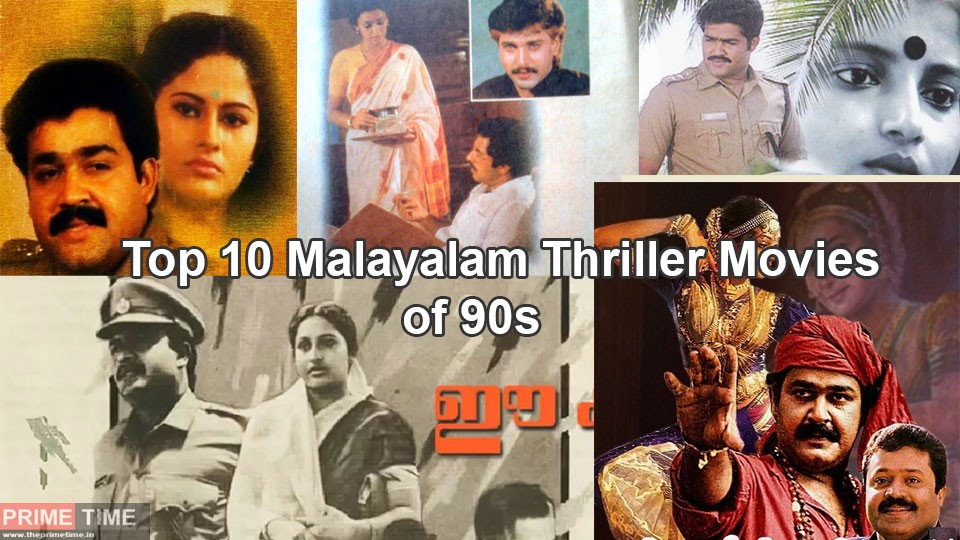 Top 10 Malayalam Thrillers of the 90s

Thrillers have been a favorite genre for filmmakers in all languages â€‹â€‹as they keep viewers engaged in its suspense. Movies conspiring to solve murder cases have always been a favorite in this genre. Here we take a look at some 90s of the best thrillers in Malayalam cinema. If you haven’t seen them, watch them. And if you’ve seen them, see them again.

Manichitrathazhu is a 1993 epic Indian Malayalam psychological horror film directed by Fazil, written by Madhu Muttam and produced by Swargachitra Appachan. The film tells the story, when a forbidden room in an old bungalow is unbolted, the spirit of a vengeful dancer is unleashed. The story is inspired by a tragedy that occurred in the tharavad of Alummoottil, a central family of Travancore, in the 19th century. The film stars Mohanlal, Suresh Gopi and Shobana with Nedumudi Venu, Innocent, Vinaya Prasad, KPAC Lalitha, Sridhar, KB Ganesh Kumar, Sudheesh and Thilakan in supporting roles. The film won the National Film Award for Best Popular Film Providing Healthy Entertainment and Shobhana received the National Film Award for Best Actress for her portrayal of Ganga / Nagavalli.

Oru CBI Diary Kurippu is a 1988 Indian Malayalam mystery thriller film directed by K. Madhu, written by SN Swamy, and starring Mammootty, Suresh Gopi, Jagathy Sreekumar, Mukesh and Sukumaran. The film tells the story when Prabhakara Varma is called in to investigate the death of Omana, the daughter-in-law of a local businessman. It sounds like suicide, but Varma is sure it isn’t. The main character, CBI officer Sethurama Iyer is inspired by a police officer named Radha Vinod Raju, a cadre of Jammu and Kashmir IPS Officer who in 2009 was appointed the first head of the Indian National Investigation Agency.

Yavanika is a 1982 Indian Malayalam-language mystery thriller written and directed by KG George and starring Bharath Gopi, Nedumudi Venu, Jalaja, Thilakan and Mammootty. The film explores the drama behind the scenes of a traveling theater group. The plot revolves around the search for an unpopular tabla player from the troop who suddenly disappears. The film received wide critical acclaim. It won the Kerala State Film Award for Best Picture (shared with Marmaram), Second Best Actor (Thilakan) and Best Story (shared with Marmaram).

Utharam is a 1989 Malayalam mystery thriller starring Mammootty, Suparna, Sukumaran, and Parvathy. It was written by Malayalam writer MT Vasudevan Nair based on DaphnÃ© du Maurier’s short story No Motive. The film is set with the suicide of Selina, wife of a wealthy businessman, Mathew. As he couldn’t find any reason for his wife’s suicide, Mathew calls his friend Balakrishnan Nair, a Delhi-based journalist finds answers. The film then follows Nair’s investigation to find the motive for Selina’s suicide. The investigation leads him to unearth some disturbing secrets about Selina and her friend.

Jagratha is a 1989 Malayalam investigative thriller directed by K. Madhu, starring Mammootty, Mukesh, and Jagathy Sreekumar. It’s also a murder-solving mystery in which CBI’s Sethuramayar investigates the murder of an emerging actress, Ashwathy. Following the same investigative scheme, the team uncovers all the mysteries of the murder, but the real culprit is only revealed in the climax. The film maintains the suspense throughout the storytelling and features plenty of twists for viewers to keep guessing.

Ee Thanutha Veluppan Kalathu is a mysterious thriller, written by Padmarajan and directed by Joshiy. It stars Mammootty, Nedumudi Venu, Lalu Alex, Suresh Gopi, Sumalatha, Lakshmi and Murali. It tells the story When an elderly and socially respected judge is found murdered in a gruesome murder spree involving elderly victims, a cop must revisit the story and start with an old unsolved murder while avoiding the risks of a possible serial murder. The plot unfolds while holding the viewer in suspense and the film advances at a steady pace.

Charithram is a 1989 Indian Malayalam-language thriller starring Mammootty and Rahman, as well as Shobana, Lizy, Jagathy Sreekumar, Janardhanan, Murali and Pappu in other key roles. It was written by SN Swamy and directed by GS Vijayan in his early days as a director. The film tells the story of Philip who desperately seeks to prove that Raju is not his brother but a double and an impostor. Along with his trusted friends, he repeatedly tries to test it in order to expose it.

Ee Kanni Koodi is a 1990 Indian Malayalam Police procedural drama film directed by KG George and produced by Ousepachan Valakuzhy. It is an investigative story into the murder of a prostitute and the path that leads to it. The film stars Ashwini, Saikumar, Sukumari and Thilakan in the lead roles.

Mukham is a 1990 Indian Malayalam-language thriller co-written and directed by Mohan, starring Mohanlal, Nassar and Ranjini in the lead roles. The film tells the story of a policeman who tries to find and stop an unknown serial killer who has killed three victims and is considering a fourth. The film has no songs, but features a musical score composed by Johnson.

The best thrillers coming in 2021